From where was the Earth raised - water or space?

Srimad Ramayana mentions about the creation of Earth as follows:

All was water only in the beginning from which element the earth was formed. After that, the self-existent Brahma with all the gods came into existence.

Thereafter, that Brahma, assuming the form of boar, caused the earth to rise from water and with his sons of pure soul, created the entire world.

The question is not about who raised the Earth.

However, water is also a part of Earth. Then how can the Earth be raised from water?

By the way, the salilam (सलिलम्) has another meaning also, apart from water: waves, kind of wind.

So can we think that the Earth might have been brought out from the space, but not out of water?

The water here referred to is the water of the cosmic ocean - Garbhodaka Ocean. 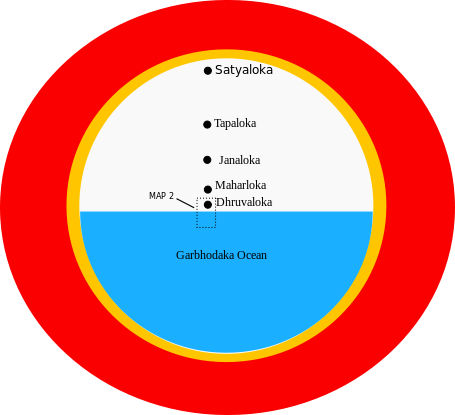 Half of the Hiranyagarbh is filled with water and the other half is space, the space in which we live. All the stars and galaxies are in this space.

The earth fell into this ocean so Lord Vishnu assumed the form of Varaha and brought back earth from the depths of Garbhodaka ocean.

However, water is also a part of Earth. Then how can the Earth be raised from water.? How to know ocean exsisted out of ocean?

The explanation is given in Shreemad Bhagvat Purana ,where the story of Varaha avatara is discussed in detail.SB 3.13: The Appearance of Lord Varāha

It's said in that chapter that earth was submerged in the great water.

O master of the demigods, please attempt to lift the earth, which is merged in the great water, because it is the dwelling place for all the living entities. It can be done by your endeavor and by the mercy of the Lord.SB 3.13.15

So at that time earth was submerged in flood water i.e. by a deluge. At the same time the earth itself was under water of ocean.

So what is this ocean? There were two oceans one was on earth ,and one was inside which earth itself was submerged.

Brahma thought: While I have been engaged in the process of creation, the earth has been inundated by a deluge and has gone down into the depths of the ocean. What can we do who are engaged in this matter of creation? It is best to let the Almighty Lord direct us.SB 3.13.17

It's said in Dwadasha Skanda -Chapter four of the same Purana ,which is describing four types of Annihilation's that at the time of Annihilation the shell of the universe gets fully submerged in water forming single cosmic ocean.

So at that time the earth as whole was also submerged in cosmic ocean ,which forms during Annihilation .i.e. Pralaya. So at the time Lord Varaha lifted the earth ,the ocean in which she was under was the ocean formed during previous Annihilation (Pralaya).

At that time, the shell of the universe will fill up with water, forming a single cosmic ocean.SB 12.4.13

Thus there were two separate oceans. one was on the earth which was filling whole earth ,and the other was cosmic ocean from the time of previous Annihilation.

Not the answer you're looking for? Browse other questions tagged ramayana brahma creation .

2
when hiranyaksha dipped earth in water (ocean) how to know that ocean existed out of ocean. actually out of earth there is no ocean
5
From where does the water come at the end of Kalpa?

10
Why was earth created and why did we come to Earth?
5
From where does the water come at the end of Kalpa?
3
If Brahma created the universe then where he was living before creating it?
9
Is it mentioned in any ancient scripture that Bhagiratha was raised by a lesbian couple?
2
Where do Vedas state Universe being a projection in space-time?
5
What is the association between earth and the fire element?
6
Where from human came first?
7
Meaning of Bhartrihari verse on Brahma and a swan's ability to separate milk from the water
12
How did earth sustain itself after Rishi agastya drank all the water from the oceans?