Cow and position of Devas

The picture shows the sacred cow, Gomata, and the position of Devas (Gods) in Gomata. 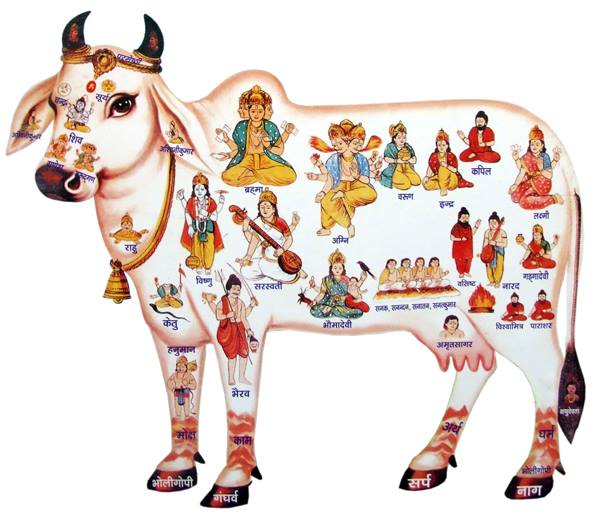 How was the position of Gods determined? For example, why is Shiva shown between the eyebrows? Why are Bhairava and Hanuman shown in the legs?

Well, we can't be sure if the painter of the picture in question is well versed in Scriptures or that he has drawn the positions of various Gods exactly as depicted in our Shastaras.

However,one can get a good summary of the positions of Gods,Rishis,Vedas etc in a Cow's body in the "Grihasta Ashrama" chapter found in the Skanda Purana.

Cows standing for virtues do fall in the care of Brahmanas as the former represent Vedas-Rig Ved being the back of Cows, Yajur Ved being their middle portion, and Sama Ved their ‘Kukshi’(stomach); ‘Ishta’or Yagnas and Yagas and ‘Apurti’ or Wells, Tatakas, Gardens etc are their horns; Veda Suktas are the body hairs; Shanti Karma and Pushti Karma are their dung and urine; ‘Aksharas’ are their feet; Cows live for their Pada-Krama-Jata-and Ghana Paatha viz. the various Mantras; Swahakar, Swadhakar, Vashatkar and Hanthakar are the four nipples of their breasts, each of the nipples representing Devatas; Pitras; Bhutas, Rishis, Munis and Sureswaraganas; and Human beings respectively. The last nipple yeilds maximum milk to human beings.Thus the responsibility of looking after cows is squarely on human beings

Answer for this question is also found in the Padma Purana.

Not the answer you're looking for? Browse other questions tagged cows gods .

4
What does the Atharva Veda say about cows?
3
Where did the notion that cows are sacred originate from?

7
Each God has a specific trait in Hinduism
7
Why "Panchagavya" is considered holy in Hinduism?
14
Why do Devas stop people from attaining Brahma Vidya?
9
If Devas and Rishis are self-realized, then why do they act contrary to it?
1
Balance of strength between Asuras and Devas
3
Discrepancy in the Manusmriti regarding Devas being fond of alcohol just like the Yakshas, Rakshasas, and Pisachas?