Did Lord Brahma kill any demons?

I was reading Shiva Purana and in Rudrasamhita Chapter 16, I came across the following attached section. 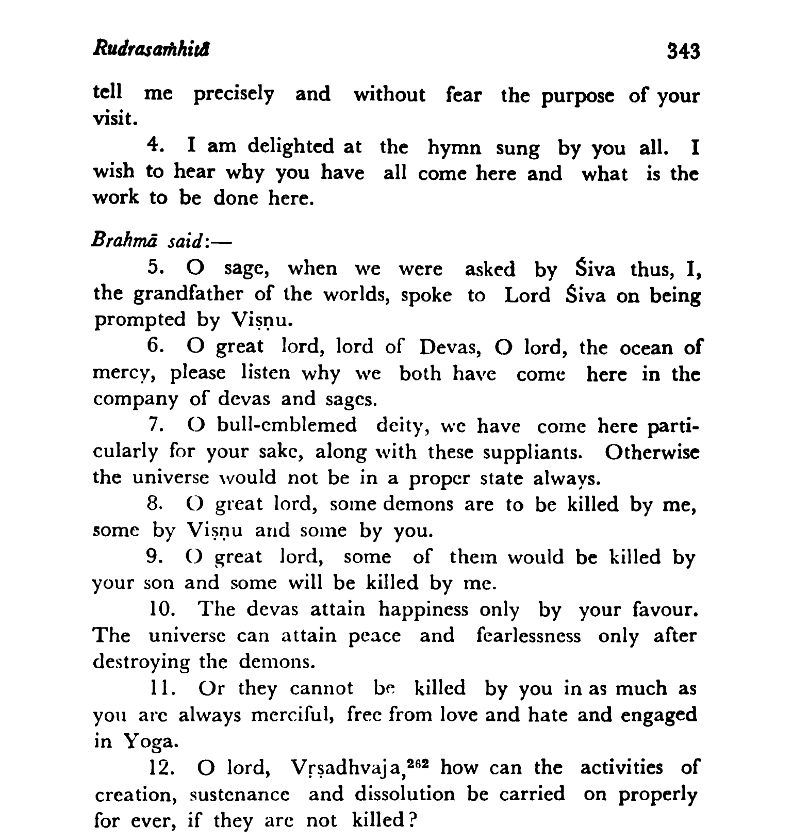 Here, in 8th and 9th verse, Lord Brahma said that 'some demons are to be killed by me'. Till now, I have only heard Lord Brahma giving boons to people or creating different types of species but I haven't heard of him ever killing any demon. Is there any story where he has actively killed some main demons?

Chapter 21 (pg 82-86) of the Sristi Khanda of Padma Purana recounts how Brahma killed a demon named Vajranabha and found Puskara.

Once Brahma wanted to perform a sacrifice. He went to earth to select a place for it. He arrived at a forest where the trees request him to stay and bless the place.

15.He meditated on the highest god who created this world. While meditating it came to his mind: 'How shall I perform a sacrifice?

16.Where on the earth—at which place—should I perform the sacrifice?

17.Kasi, Prayaga, Tuiiga and Naimisa and Sriikhala, so also Kafici, Bhadra, Devika, Kuruksetra and SarasvatI, Prabhasa and others are the holy places on the earth.

21.When Brahma was thus thinking, this idea came to his mind: 'I now go to the earth.'

22-24. Reaching the place first, he entered that best forest, full of many trees and creepers; adorned with many flowers; filled with the notes of many birds; crowded with groups of many beasts; making gods and demons fragrant with the perfumes of the abundant flowers of trees; its ground was graced with flowers which were as it were intentionally placed there.

All those rows of trees, seeing god Brahma who had arrived like that, and presenting themselves to him with devotion, poured forth their wealth of flowers. Accepting the flowers (offered) by the trees Brahma said to them, "Welfare to you; ask for a boon."

The trees, free from (any) control, with humility (lit. with their palms joined in obeisance) having saluted Brahma said: "If, O god, affectionate towards people, who take refuge with you, you are granting a boon then always stay by us in the forest."

Thus Brahma, the granter of boons, favoured the trees.

Brahma remains there for a 1000 years. He throws a lotus on the ground, its impact makes the earth and the heavens shake. The distressed and frightened gods enquire Vishnu of the cause. Vishnu takes them to Brahma.

63.Remaining (there) for a thousand years he threw a lotus on the ground. The earth by its fall trembled upto bottom.

64-65. Helpless oceans, with agitated waves, crossed their boundary.Thousands of mountain-peaks occupied by tigers and vicious elephants struck as it were with Indra's bolt, were shattered.

66-67. The mansions of gods and Siddhas (semi-divine beings characterized by eight special faculties), the cities of Gandharvas shook, tottered and penetrated the earth. The Kapota-clouds, showing a collection of sheaths fell (i.e. showered rain) from the sky. There were poignant suns, covering the clusters of luminaries.

68.Due to the great sound of that the three worlds with the mobile and immobile in it, rendered dumb, blind and deaf were frightened.

69-70. The bodies and minds of all gods and demons sank down and did not know what it was. Mustering courage all of them looked for Brahma. They did not know where Brahma had gone. (They could not understand) why the earth quaked and why the omens and portents appeared.

71.Visnu just went there where the gods had remained. Gods saluting him said these words:

72-73. "O revered one, why is this appearance of omens and portents by which, the three worlds as it were joined with death are made to tremble, and the Kalpa has come to an end and the oceans have crossed their boundaries? Why have the four steady quarter-elephants become unsteady?

77.Thus addressed, Visnu, cherished by the supreme, said: "O gods, do not be alarmed; all of you listen to the cause of this.

78.This I, perceiving (the cause) definitely will tell you as it happened.

79.Revered Brahma, the grandsire of the worlds, with a lotus in his hand, settled in an extremely beautiful region—a heap of religious merit—on the slope of mountains to perform a sacrifice.

80.And from his hand the lotus fell on the ground. It made a great sound which caused you to tremble.

81-84. There, being greeted with the fragrance of flowers by the trees, he favoured the forest with beasts and birds, and for favouring the world took delight in residing there. The revered one, benefactor of the worlds, put up that best holy place (called) Puskara. Going there with me propitiate Brahma. The revered one, when pleased, will give you excellent boons."

Vishnu and the other gods pray to Brahma. Brahma appears to them and explains the cause of the sound.

124. "O revered one, this in itself is a great boon which is quite enough, that a good sound was heard by us when you threw the lotus.

125. Why did the earth tremble? Why were the people distressed? That cannot be without any purpose. Tell (us) the cause of this, O god."

126. This lotus is held by me for your good and for protecting the gods. Now listen what was the cause.

127. This demon Vajranabha by name, takes away the life of children. He remains taking shelter in the nether world.

128. Knowing about the arrival of you, remaining in penance, having laid down your weapons, the wicked one wanted to kill (you) the gods along with Indra even.

129. I brought about his destruction by dropping the lotus; he was proud of his kingdom and splendour; so I killed him.

132. I killed the sinner with a spell for your well-being. He has reached the worlds of the religious due to the sight of this lotus.

133. Since I dropped the lotus (here), therefore this place will be known as Puskara, a great, sanctifying holy place, giving religious merit.

Lord Brahma is said to have created death. The figure of Death is picturesquely described in the Mahabharata as 'a dark woman, wearing red garments, with red eyes and red palms and soles, adorned with divine ear-rings and ornaments' and she is given the job of 'destroying all creatures, imbeciles and scholars' without exception.

Note : Here, death is represented as a female and Lord Yama works under her.

Not the answer you're looking for? Browse other questions tagged brahma shiva-purana .

22
Did lord Brahma commit incest with his daughter?
15
Were there any incarnations of Lord Brahma?
8
What boons did Ravana receive from Lord Brahma?
0
Why Maa Lakshmi says that neither Lord Brahma nor Lord Vishnu only Lord Shiva commands her to move from one place to another.?
3
Did Maharshi Narada curse Lord Brahma?