Is Raja Ravi Varma's painting Birth of Shakuntala true to the story?

The Wikipedia article for Vishwamitra has a picture of the sage rejecting both Menaka and her daughter, Shakuntala. The picture seems to be a painting by Raja Ravi Varma.

Is the painting true to the story of Vishwamitra and Menaka as described in the Ramayana and/or Mahabharata, in that, did Vishwamitra reject Shakuntala as well? Was he aware of her birth? Did he ever come in contact with Shakuntala during or after her birth? 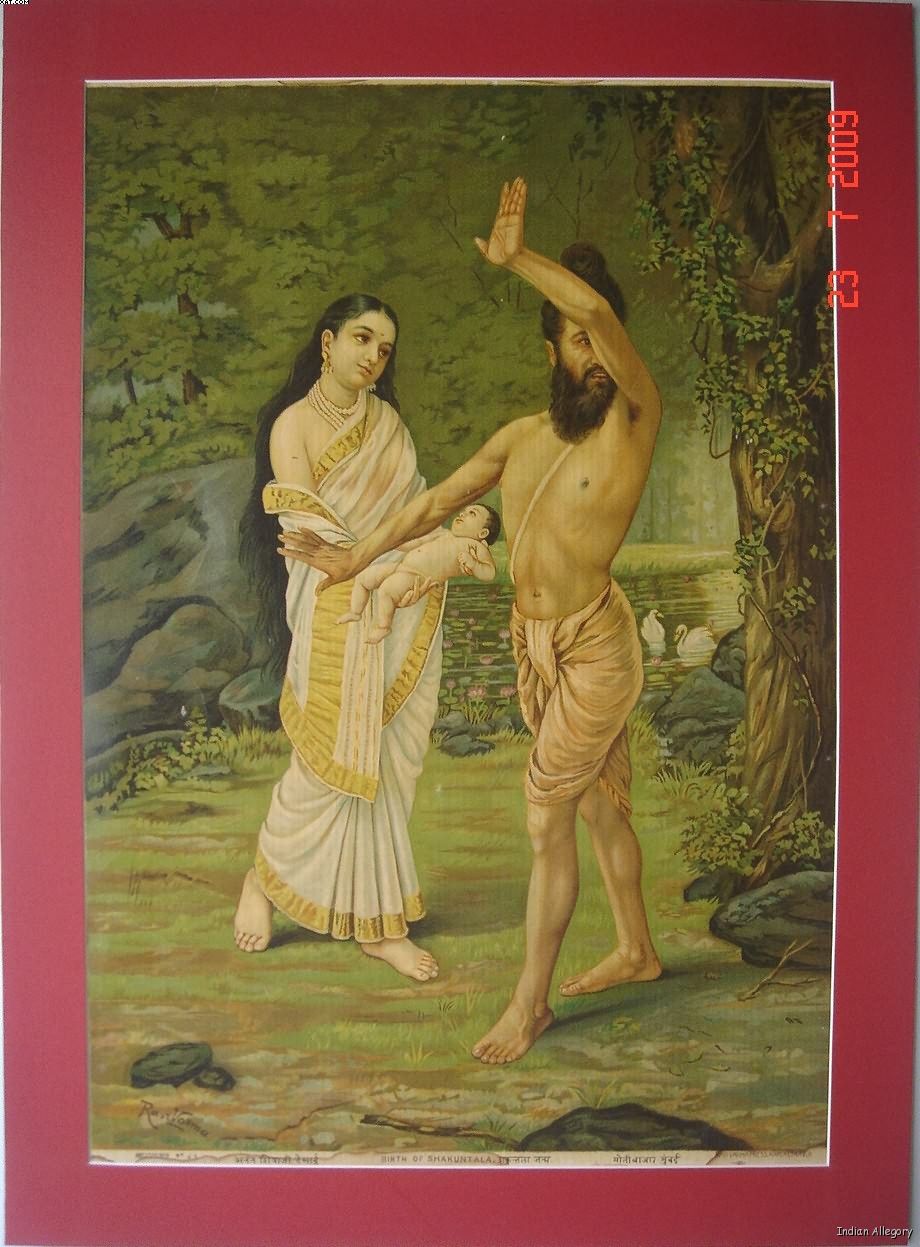 Reference for the picture used: www.columbia.edu

Note: Should using the copy of the painting here pose a Copyright issue, feel free to edit and remove it.

The scene in the painting has no basis in Hindu scripture. Here is how this chapter of the Adi Parva of the Mahabharata describes the birth of Shakuntala:

And sporting with each other, just as they pleased, for a long time as if it were only a single day, the Rishi begat on Menaka a daughter named Sakuntala. And Menaka (as her conception advanced) went to the banks of the river Malini coursing along a valley of the charming mountains of Himavat. And there she gave birth to that daughter. And she left the new-born infant on the bank of that river and went away.

And here is how this chapter of the Bala Kanda of the Ramayana describes Vishwamitra leaving Menaka:

Then after the lapse of that ten year period Vishvamitra became doleful with distress and he is enwrapped in humiliation, as it were, and, oh, Rama, Raghu's legatee, then a resentful thought occurred to him. "All this is the mischief of gods to defraud me of the great merit of my ascesis. Ten years have rolled by as if they are just a day and a night. Furthermore, I who am under the influence of lust and lure had to encounter this hindrance in my ascesis." Oh, Rama, that best saint suspired heavily when he became emotional with reparation. But on seeing the scared celestial wench Menaka, who is shivering and waiting with suppliantly adjoined palms, he sent her away with pleasant words, and he that Vishvamitra indeed went to the northern Himalayan mountain.

So Vishwamitra didn't even see the baby. Vishwamitra abandoned Menaka while she was still pregnant, after which Menaka proceeded to the Malini river, gave birth to Shakuntala, and then left her there because Menaka had to return to the service of Indra. Now it's quite possible that Vishwamitra knew about Menaka's pregnancy when he left her, but I don't know of any scriptures that say that. And as far as I know, Shakuntala never met Vishwamitra; she just considered herself to be the adopted daughter of the sage Kanva.

Not the answer you're looking for? Browse other questions tagged mahabharata ramayana art vishwamitra .

6
What is the story of the birth of Mandodari?
5
What is the story behind this Vishnu - Muchukunda painting?
5
What was the reason behind the clash between Vashishtha and Vishwamitra?
5
How did the life of Vishwamitra end on this Earth?
6
In the painting shown who is the person standing on stairs in front of the throne?