What is the story of Rishi Durvasa and King Ambarish?

I want to know the story of Rishi Durvasa and King Ambarish. Please somebody answer my question!

King Ambarish ,a king of Surya Dynasty, was an ardent devotee of Lord Vishnu. Once King Ambarish decided to fast. But after few days he decided to break his fast as he was feeling hungry.Then Sage Atri and Anusuya's son Sage Durvasa appeared before him. Sage Atri suggested Ambarish to break his fast only when Sage Durvasa returned from bath. Ravenous Ambarsh could't wait for Durvasa and broke his fast by drinking water, at consent of other sages. But short-tempered Durvasa after knowing this, became angry and plucked a hair from his head and threw it on the ground. A demon sprouted from the hair and the demon killed the King Ambarish. 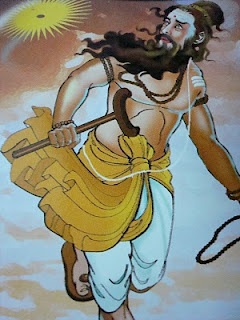 Not the answer you're looking for? Browse other questions tagged vishnu shiva shiva-purana vishnu-purana .