Procedures used for preserving the integrity of the Vedas

It is said that the metering of the sanskrit verses in Vedas and process of recitation imbue certain qualities to the scripture that make it inimitable(if I may use the word) or easy to identify errors and corruptions introduced over time - a kind of a linguistic/phonetic error correction code. What exactly are these precautionary methods used for preserving the Vedas and how are they being put to use? Have any corruption been identified in available sources of Vedas based on this methodology?

Very special procedures are applied to preserve Vedas. Here are some of them:

Veda Výas divides Veda at the end of Dwapar into Rig, Yajur and Sama so that it becomes suitable for men of Kaliyuga so that they can just study part of it as they do not have enough memory and intellect to learn all. For eg. There have been several Vedas Vyasa for this purpose, the present Veda Vyasa being Krishna Dwaipayana. For eg. Here is what Vishnu Purana tells:

Twenty-eight times have the Vedas been arranged by the great Rishis in the Vaivaswata Manwantara in the Dwápara age, and consequently eight and twenty Vyásas have passed away; by whom, in their respective periods, the Veda has been divided into four. In the first Dwápara age the distribution was made by Swayambhu (Brahmá) himself; in the second, the arranger of the Veda (Veda-vyása) was Prajápati (or Manu); in the third, Uśanas; in the fourth, Vrihaspati; in the fifth, Savitri; in the sixth, Mrityu (Death, or Yama); in the seventh, Indra; in the eighth, Vaśisht́ha; in the ninth, Sáraswata; in the tenth, Tridháman; in the eleventh, Trivrishan; in the twelfth, Bharadwája; in the thirteenth, Antaríksha; in the fourteenth.....

Also families are associated with Shakhas and it is duty of descendent of that family at least to learn his Shakhas and Vedas.

Samhitas are the most important part of Vedas as they are the heard words during meditation. Samhitas of Vedas are itself revealed in specific meters such that not a single syllable can be removed or added from it. For eg. Gayatri mantra of Rigveda is in Gayatri meter and it contains 24 letters. In the similar way Samhitas are revealed in other chhandas like Anusthub, Jagati etc. For eg:

Gayatri= 24 syllables in total. 3 verses each of 8 syllables.

Anushtup= 32 syllables in total. 4 verses each of 8 syllables.

Pankti= 40 syllables in total. 5 verses each of 8 syllables.

Trishtubh= 44 syllables in total. 4 verses each of 11 syllables.

Jagati= 48 syllables in total. 4 verses each of 12 syllables.

And so on other meters also. As each meter has specific number of letter so it helps in protecting Vedas.

This is an advanced method of protection. It protects not only words of Vedas but also tone of Chanting. Vedas are chanted in level of pitch. They are:

i)Uddata = Pronounced in Normal pitch. Syllables aren't marked for it.

ii)Anudatta = Pronounced in Lower pitch. Syllables are marked by sign "_" below it. Syllables bearing such signs are chanted with lower pitch.

iii)Swarita = Pronounced in Higher pitch. Syllables are marked with longer ' sign above it. They are chanted with higher pitch.

iv) Dirgha swarita = It is Swarita pronounced for longer time period. Represented by longer '' sign above syllable. For eg. Here is an example of Swara marks: 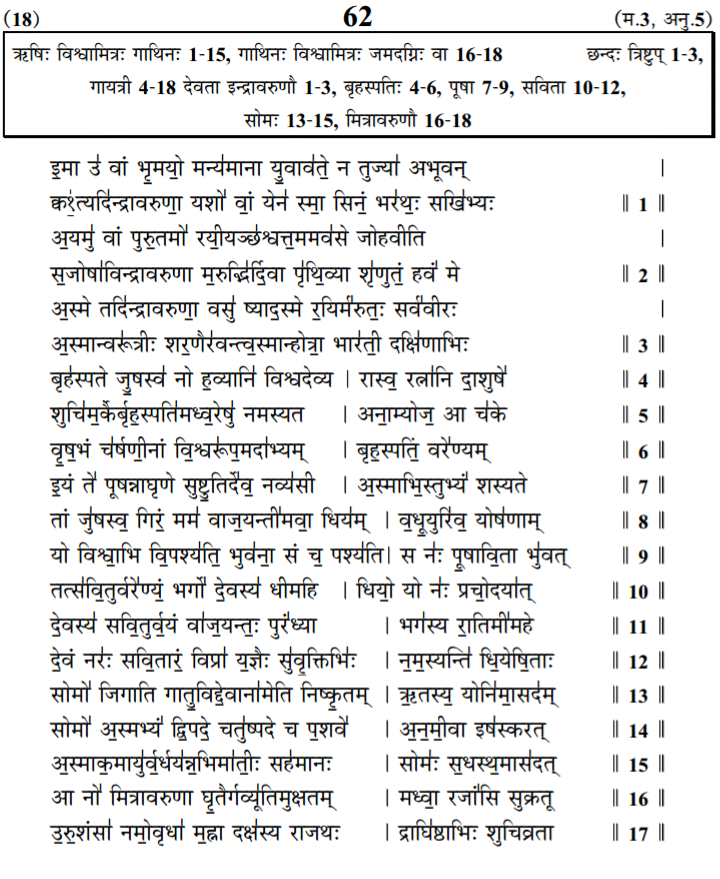 A single mantra has various signs in various places thus giving a specific tone to it. Thus Swara protection protects even tone.

To protect even the tone more precisely, Mudras ie. position of specific position of hands and heads are moved.

In this way an advanced Veda reader can immediately recognize mistake in pronounciation just by looking the chanters hand position.

It is also advanced method applied for protection of Vedas. It includes method of recitation of Vedas by repitition of syllables and words. There are various Patha methods like 'Vakya', 'Krama', 'Pada', 'Jata', 'Ghana' etc.. Among them Ghana is the most advanced method. In Ghana recitation single syllable is recited 13 times. The pattern is

Thus a 24 syllabled Gayatri becomes such long in this Ghana Path. It helps both in memorization and preservation of Vedas.

For eg if I have to say 'I am writing answer here' in Ghana format. I have to recite like this:

In this way our Vedas were preserved by Vocal tradition from teacher to disciple.

There is no question of authenticity for these Upanishads. However there are other authentic Upanishads as well.

A capable student learns Vedas from a learned teacher. He recites those mantras consisting specific number of syllables in specific tone, repeats them in specific pattern, moves his body parts (hands and head) in specific way for each syallble. In this way he learns in extremely precise way.

Not the answer you're looking for? Browse other questions tagged vedas sanskrit .

0
How can the integrity of a Vedic verse be verified?
8
Do Yajurveda 40.9, Yajurveda 32.3 and Bhagavadgita 7.20 reject idol worship?
14
Who all were the different Ved-Vyas?
13
Which Upanishads are quoted in sage Vyasa's Brahma Sutras?
11
Is Lord Shiva clearly noted as Prathama Purusha in any Veda?
12
What are the valid and foolproof methods of determining whether a certain scripture is interpolated or not?
9
Sanskrit examples of Ghanapatha recitation?
7
Are there any Variants in Samhita of Vedas?
10
Which mantras should be recited to properly worship Lord Rudra?
7
The Mysterious Origin of the Divine Sanskrit Language
See more linked questions

5
In which of the 4 Vedas procedures of ritualistic worship are mentioned?
7
Is the language of all the four Vedas similar or is there difference in language of the four Vedas too?
10
Which are the methodologies for interpreting Vedas?