Who was elder amongst Lava and Kusha ( twins of Rama and Sita)?

I get different answers from different sources as for who is the elder of the twins.

For example : This wiki page quotes Kusha as eldest.

I searched a bit and found this English translation of Uttara Ramayanam which seems to answer this question.

and attained to great delight on beholding those two highly effulgent sons, resembling the newly risen sun and the celestials. There upon he made arrangements against the oppression of ghosts and goblins. There upon taking Kusa (the upperpart of the grass) and Lava (lower part) the great ascetic Valmiki made those arrangements. And giving Kusa sanctified by those Mantras unto the hands of elderly woman he said, "do ye rub the person of the elder boy with these"; and giving them Lava he said “do ye rub the person of the younger brother with this. And according to this I shall name the first Son Kusa and the second Lava; and by those names they shall be celebrated on earth.” Thereupon reverentially taking from the hands of Vãlmiki and Kusa Lava, the means of protection, the elderly ladies engaged in guarding them. Hearing that Sita without any trouble had given birth to two sons and elderly female ascetics had been engaged in protecting them and hearing the chanting of Rãma’s glories in the midnight, Satrughna thought within himself. “Blessed it is that Sitã hath given birth to two sons.” And with this joy the live long night of Srãbana passed away in no time. Having performed the morning rites after the expiration of the night and taken farewell from the ascetic Vãlmiki, Lakshmana proceeded towards the west.

Posting the screenshot of the relevant portion for reference 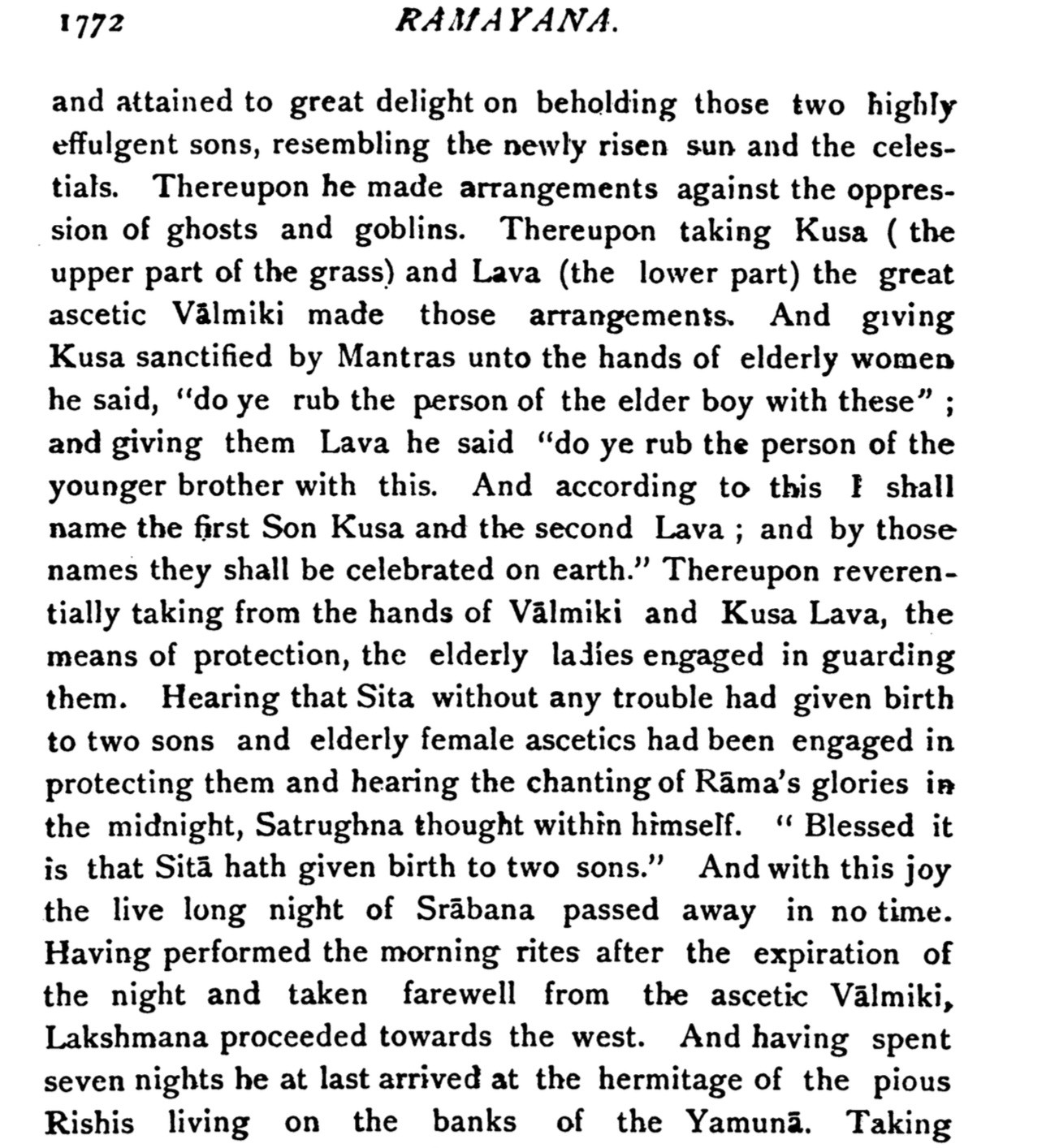 Not the answer you're looking for? Browse other questions tagged ramayana rama sita .

4
Does the narrator of Ramayana appear in Ramayana?
5
Who was the eldest among the sons of Lord Rama and his brothers?

7
Did Lord Rama exile Maa Sita?
3
Why did Rama and Sita wait so long to have kids?
12
Why did Lord Rama ask mother Sita for Agni Pariksha?
7
Is 'Janani Janmabhumischa Swargadapi Gariyasi' wrongly attributed to Rama? Is it even part of Valmiki Ramayana?
4
Why wouldn't Sita go back to Mithila after she was abandoned by Shri Rama?
5
Previous births of Lava and Kush
2
What were the reasons for suffering of Lord Rama and Devi Sita?
0
Reference to the demon Naraka in The Ramayana and interpretations
1
When do Lava and Kusha sing the song in Ramayana?