What is the story behind Lord Rudra (Shiva) holding the skull of Indra?

I read the extract as shown in the image below from Vayuviya Samhita Chapter 14 of Shiva Purana: 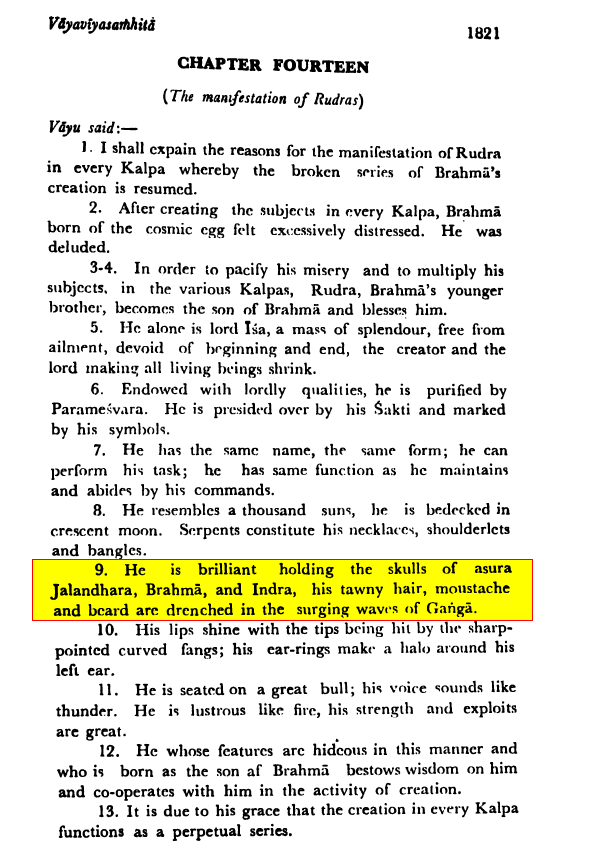 He (Lord Rudra) is brilliant holding the skulls of asura Jalandhara, Brahma and Indra, his tawny hair, mustache and beard are drenched in the surging waves of Ganga.

This skull could be probably skull of a previous Indra. Rudra at Prakrta Pralaya (dissolution after death of Creator Brahma) burns entire Universe to ashes and wears skulls of Devas as Ornaments. So, there could be a chance that this skull belongs to some previous Indra.

Reducing to ashes the entire universe, Mahesvara then shoots a terrific weapon called Brahmasiras, which can even burn the bodies of the gods.

When all the gods were reduced to ashes, Parvati, the excellent daughter of Himalaya, stands by Siva as the only witness of his performance. This has been ordained by the Vedic Srutis.

Lord Siva, wears a garland of skulls of the gods, as an ornament. He fills the sky with the multitudes of suns and the moons.

It is from the time when Rudra killed Vishnu, Indra and many others. This is given in Chapter 100 - Destruction of Daksha's Sacrifice, of the Shaiva Linga Purana:

In the great sacrifice of Daksa, Lord Rudra burned Devas along with Visnu and sages. (2) His Gana named Bhadra was sent by the lord Paramesthin (3)

He (Veerabhadra/Rudra) cut off the head of lord Indra ... ... Without any difficulty he killed thirty three Devas thus. Sportingly he killed three thousand three hundred and thirty three Devas along with the three leading Devas. He killed the leading sages too. This lord killed those Devas who stood in readiness for fighting. Lord Rudra hit them with his fist, swords, arrows and other things. Then Visnu of great splendour and intensified strength lifted up his discus, and fought with Rudra ... ... Through contact with the tips of the bits of the bow he (Rudra) cut off the head of the lord (Vishnu). His head that was cut off fell quickly into the nether worlds wafted by the wind originating from the vital breaths of the Pinaka-bearing lord. (18-32)

But everything went well in the end:

Not the answer you're looking for? Browse other questions tagged shiva shiva-purana indra .

17
Why was Surya killed by Lord Shiva?
18
Who were the previous Indras that incarnated as the Pandavas?
5
Whose skull is in Siva’s necklace that Virabhadra mentioned to Narsimha?

45
Why doesn't Shiva worship anybody where as Vishnu worships him in all his incarnations?
4
Who is the wood-cutter Indra promised would be honored in every Yagna?
12
What is the story of Indra attacking Lord Shiva on his neck?
1
What scriptures describe Shiva discussing selling salt in the Banasura story?
2
What is the mystery behind Sage Vāmadeva fighting with Indra?
6
How did Tarakasura know about future incarnations of Lord Vishnu?
0
Why Maa Lakshmi says that neither Lord Brahma nor Lord Vishnu only Lord Shiva commands her to move from one place to another.?