What scriptures describe Vishnu marrying a rebirth of the golden Sita statue?

I'm currently visiting India, and I just went to my Mom's Kula Devata, the Veeraraghava Perumal Vishnu Temple in Thiruvallore. Many things have happened in this location over the ages, including Vishnu reteaching the Vedas to Brahma after he forgot it due to his fifth head being cut off (which I discuss here). My question is about another incident that happened here, the one that gave it the name "Veeraraghava." 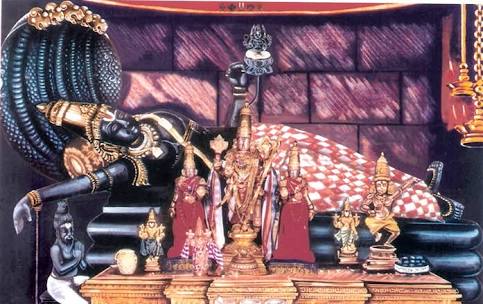 The story as I understand it goes roughly as follows. Rama decides to perform an Ashwamedha Yagna to free himself from the sin of killing a Brahmin (namely Ravana). But you can't perform an Ashwamedha Yagna without your wife, and Sita had already departed the Earth. Rama's advisors urge him to marry someone else, but he refuses because he has taken an Ekapatni Vrata (a vow to marry only one wife). Instead, he places a golden statue of Sita next to him as he performs the Yagna. But then he has a dream where Sita appears and tells him something like "Rama, how could you? I am your wife and you are putting a golden statue next to you? If so, you should marry that statue in a future birth!" And indeed, in the Kali Yuga the golden statue is reborn as Vasumati, daughter of the king Dharmasena. Then Vishnu comes again in the form of Rama and marries her. In any case, to this day the statue of Vasumati in the temple is referred to as "Swarnasita", or golden Sita.

Now the story of Rama performing Yagnas next to a golden statue of Sita is well-known; it's described in this chapter of the Uttara Kanda of the Ramayana. But my question is, are there any scriptures that describe the golden statue being reborn as Dharmasena's daughter Vasumati? Is the story of Vishnu marrying Vasumati even mentioned in any Hindu scripture?

By the way, Thiruvallur is one of the Divya Desams, the 108 sacred places of Vishnu which I discuss here.

10
What is the origin of Brahma's four heads?
9
What was the purpose of Vishnu's incarnation as Rama's ancestor Mandhata?
7
Who compiled the list of 108 Divya Desams of Vishnu?
8
What scriptures describe the Rishi Shalihotra cutting the wings off of horses?