Why does Thirumazhisai Alwar say the Pandava Thoothar statue of Krishna is older than him?

One of the Alwars was known as Thirumazhisai Alwar. He was the son of the sage Bhargava, but he was raised by tribal people and became a famous Shaivite poet, before ultimately converting to Vaishnavism. But my question is about when Thirumazhisai Alwar lived. As I discuss in this question, traditional Sri Vaishnava accounts say that Thirumazhisai Alwar, along with the first three Alwars, were all born in 4203 BC, almost a thousand years before the birth of Krishna!

Yet in this verse from his poem "Thiruchanda Virutham", Thirumazhisai Alwar says this:

Before I was born, He was standing in Ooragam, was sitting in Paadagam and was lying down in Tiruvekka. At that time I was not born with wisdom; When once I was born with this wisdom, I never forgot. Therefore, the Lord left all those places and has taken permanent abode in my heart. 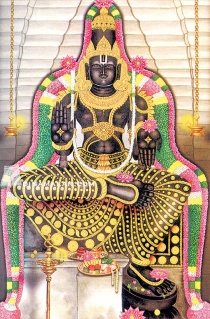 But I'm interested in Paadagam, which refers to the Pandava Thoothar temple, again in Kanchipuram. Pandava Thoothar means "messenger of the Pandavas", and it's a gigantic statue of Krishna sitting and showing his Vishwarupa form in the court of Duryodhana, which I discuss here. The story of the temple is that when Arjuna's great-grandson Janamejaya was listening to the Mahabharata, he heard the incident of Krishna showing his Vishwarupa form to the Kauravas, and he wanted to see the Vishwarupa for himself. So he went to Kanchipuram and prayed to Vishnu, and Vishnu appeared before him in the same manner that he had appeared to the Kauravas.

So my question is, why does Thirumazhisai Alwar say that the Vishnu was sitting in Padagam before he was born, when Thirumazhisai is said to have been born nearly a thousand years before Krishna and the Pandava Thoothar statue only appeared in the time of Janamejaya?

In the rest of the verse, Thirumazhisai Alwar speaks of his symbolic birth once he attained Jnana, so is it possible that he's referring to that here too? He could have lived a long life, and he may have only attained Jnana some time after Vishnu appeared before Janamejaya. Another possibility is that he means that Vishnu has eternally resided in these places, even if he hadn't manifested in statue form yet.

Are there any commentaries which shed light on this?

Yes. Tirumazhisai azhwar is speaking about his symbolic birth. He says that he attained birth with wisdom due to grace of the Lord.

According to traditional Vaishnava accounts, he lived for unbelievable period of 4700 years. Even though he was born in Dwapara yuga, he considers that his birth happened after he has realised the lord.

Swami Vedanta Desikan quotes this verse in his work Upakara Sangraham while explaining section 5 23rd upakara i.e., favour done to us by the lord.

Here is the alternate translation for the verse of Tirumazhisai Azhwar from the question:

My Lord was standing in Thiruvoorakam; he was sitting in ThirupAdakam; and the lying-down posture in ThiruvekkA. At that time, I was not born (since I didn’t acquire wisdom of my being a servant of the Lord); now, after getting the knowledge, I have not forgotten it. Hence, the Lord has taken these postures of standing, sitting and lying-down in my heart.

It is clear that Azhwar is talking about his birth with wisdom when got realised that he is the servant of the Lord. Not only Tirumazhisai Azhwar, every sātvik soul considers its birth when it gets enlightenment about lord.

He mentioned the deity forms of the god to indicate that he got enchanted due to the manifestation of Lord in those holy places. Lord followed him wherever he(Tirumazhisai) went just to capture azhwar's heart towards him. This makes clear that Azhwar got this wisdom by the grace of Lord.

We also find another example from scriptures who is also got enchanted due to virtues of the Lord. Quoting from Kishkindha Kanda of Valmiki Ramayana

I am the one who obtained servitude by the justness of this faithful and knowledgeable one, and his younger brother, by name I am named as Lakshmana.

When a person gives debt to another, he comes to ask for the money. First he comes and stands at the door steps and requests him to pay the amount. If he doesn’t get it, then the next time he sits on the front yard and forces him to pay. If he doesn’t get even then he lies down in front of the houses and refuses to leave unless he gets the money back. Similarly Bhagavan stands, sits and lies down to get kainkarya from us (that is the debt).

The above are the reasons why Tirumazhisai alwar said that he was born after Pandava Thootar statue.

18
How is 'Vishwa Virat Swaroop' of Lord Krishna described in Mahabharata?
7
Who is sage Jalabimba and what is his connection to Vishnuswami and the Rudra Sampradayam?
3
Are there any surviving poems from Thirumazhisai Alwar's disciple Kanikannan?
2
Why did Thirumazhisai Alwar never sing about the Thirumazhisai Jagannath temple?

10
Why does Kulasekhara Alwar call Vishnu "Vitruvakodu's Lord"?
10
What is the story of Vishnu appearing to sage Markandeya in Thiruvidanthai?
8
Why does Periyalwar say that Krishna was born in Thirukottiyur rather than Mathura?
5
How much does the divinely created statue of Ramanujacharya resemble him?
7
Is Dramidacharya the same as Thirumazhisai Alwar?