nakshatra: (Sanskrit) "Star cluster." Central to astrological determinations, the nakshatras are 27 star-clusters, constellations, which lie along the ecliptic, or path of the sun. An individual's nakshatra, or birth star, is the constellation the moon was aligned with at the time of birth

The ecliptic is divided into 27 nakshatras, which are variously called lunar houses or asterisms. These reflect the moon's cycle against the fixed stars, 27 days and 7¾ hours, the fractional part being compensated by an intercalary 28th nakshatra. Nakshatra computation appears to have been well known at the time of the Rig Veda.

The ecliptic is divided into the nakshatras eastwards starting from a reference point which is traditionally a point on the ecliptic directly opposite the star Spica called Chitrā in Sanskrit. (Other slightly-different definitions exist.) It is called Meshādi or the "start of Aries"; this is when the equinox — where the ecliptic meets the equator — was in Aries (today it is in Pisces, 28 degrees before Aries starts). The difference between Meshādi and the present equinox is known as ayanāngsha or fraction of ecliptic. Given the 25,800 year cycle for the precession of the equinoxes, the equinox was directly opposite Spica in 285 CE, around the date of the Surya Siddhanta.

The nakshatras with their corresponding regions of sky are given below, following Basham. As always, there are many versions with minor differences. The names on the right-hand column give roughly the correspondence of the nakshatras to modern names of stars. Note that nakshatras are (in this context) not just single stars but are segments on the ecliptic characterized by one or more stars. Hence there are more than one star mentioned for each nakshatra. 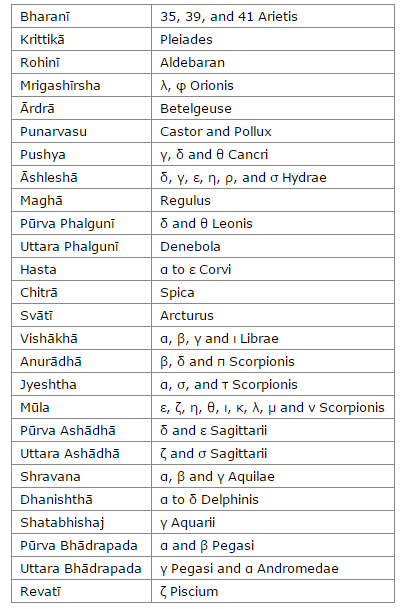 The nakshatra in which the moon lies at the time of sunrise of a day is the nakshatra for the day.

Why do nakshatras have both a presiding deity and a ruling planet(graha)?

Why is Shravana Nakshatram considered the "birth star" of Vishnu?

What is the source that describes the devatas for each Navagraha and Nakshatra?

What is the relation between trees and gods?