Ramanuja was a Hindu theologian, philosopher, and one of the most important exponent of the Sri Vaishnavism tradition within Hinduism.

Ramanuja presented the epistemic and soteriological importance of bhakti, or the devotion to a personal God (Vishnu in Ramanuja's case) as a means to spiritual liberation.

His theories assert that there exists a plurality and distinction between Atman (souls) and Brahman (metaphysical, ultimate reality), while he also affirmed that there is unity of all souls and that the individual soul has the potential to realize identity with the Brahman. 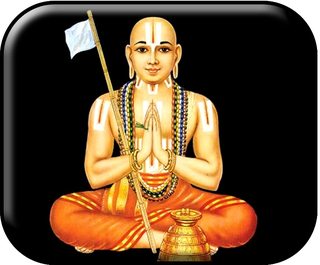 Why does Chinna Jeeyar Swami carry a bunch of sticks and a flag attached to them?

Why did Ramanujacharya & Adi Shankaracharya never refer to the Srimad Bhagavatam in their works?

Why did rAmAnuja abandon his first guru?

Why did Sri Ramanuja refuse to hail Shiva? What was the need to prove that Vishnu is the one true God?