As discussed in this answer, Krishna is a rare philosopher, who related "I / Me" with the ultimate supremacy during the discourse of Gita. That implies that the "I / Me" resides in every being & non-being & is also beyond them.

When I read below verses again & again, it makes me feel like the "I / Me" are beyond the "Brahman" as well, and are not same.

BG 8.16 - All planes along with BrahM-plane are repetitive, O Arjuna. But reaching "Me", O son of Kunti, the rebirth doesn't happen.
BG 8.17 - Knowing that thousand eras constitute a day of Brahman, [and] thousand eras complete a night, are the people who know day, [and] night.
BG 13.13 - I shall speak of that which is knowable (should be known). Knowing which, one attains immortality. The supreme Brahman dwelling under Me, is beginningless. "That" is said to be neither existent nor non-existent."
BG 13.14 - That (Knowable), which has hands and feet everywhere, which has eyes, heads and mouths everywhere, which has ears everywhere, exists in creatures by pervading them all.
BG 14.27 - For 'I' am the Abode of Brahman-the indestructible and immutable, the eternal, the Dharma and absolute Bliss.

Often in this site, we all interpret Brahman as supreme. But at least the translations of above verses are differing in nature. My guess is that, the "I / Me" represents, what we call Nirguna Brahman.
Is there any other scriptural or philosophical reference, which shows relation between "I / Me" & Brahman?

Clarification: There is always a confusion between, Brahman (supreme one) and BrahmA (4 headed deity). Now, in Gita there is no mention of such formful deity. I am not sure, even in MahAbhArata, such mention will be there. This seems more of a pictorial representation by devotees, which is coming since centuries.

My theory: According to BG 13.14 verse, Brahman is having "heads everywhere". Not only heads, but eyes, hands, feet everything, everywhere. In old times, people wanted to represent this Brahman, hence they painted with "4 heads & several hands". May be with time & interpolations, this Brahman became BrahmA and further became an [inferior] part of trinity.

Below should be the right interpretation of Brahman (image only for representation): 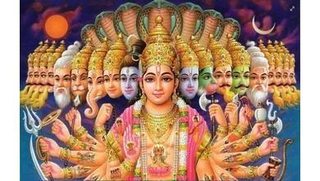 This is similar to how pictorial representation of Vishnu is done, by 'pervading throughout the universe':

BG 9.4 - This whole world is pervaded by Me in My unmanifest form. All beings exist in Me, but I am not contained in them! 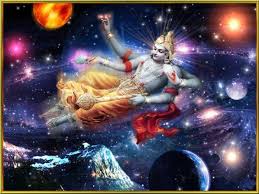 Hence, it's safe to assume: Brahman = BrahmA = BrahM, in context of this question.

8.16 O Arjuna, all the lokah, worlds; abrahma-bhuvanat, together with the world of Brahma-bhuvana is that (place) in which creatures are born, and brahma-bhuvana means the world of Brahma; punah avartinah, are subject to return, are by nature liable to come again; Tu, but; kaunteya, O son of Kunti, na vidyate, there is no; punarjanma, rirth; upetya, after reaching; mam, Me alone. Why are all the worlds together with the realm of Brahma subject to return? Becuase they are limited by time. How?

8.17 Viduh, they know; that ahah, day; brahmanah, of Brahma, of Prajapati, of Virat; yat, which; sahasra-yuga-paryantam, ends in a thousand yugas; and also the ratirm, night; yuga-sahasra-antam, which ends in a thousand yugas, having the same duration as the day. Who knows (these)? In reply the Lord says: Te, they; janah, poeple; ahoratra-vidah, who are the knowers of what day and night are, i.e. the people who know the measurement of time. Since the worlds are thus delimited by time, therefore they are subject to return. What happens during the day and the night of Prajapati is being stated:

Visit related post: Does "day of Brahma" refer to the Trimurtic creator deity or to the supreme Brahman?

I've double checked Gambhirananda's English translation from Gita Supersite. It doesn't include any such text like dwelling under Me.:

13.13 I shall speak of that which is to be known, by realizing which one attains Immortality. The supreme Brahman is without any beginning. That is called neither being nor non-being.

My theory: According to BG 13.14 verse, Brahman is having "heads everywhere". Not only heads, but eyes, hands, feet everything, everywhere. In old times, people wanted to represent this Brahman, hence they painted with "4 heads & several hands". May be with time & interpolations, this Brahman became BrahmA and further became an [inferior] part of trinity.

No, verse 13.14 is talking about Brahman not Brahma. Brahman is not limited to time, space and Brahman is called Antaryami (inner self) of all the things (Sarva Khalvidam Brahman - सर्व खल्विदं ब्रह्म​). This can be confirmed by Upanishad preaching:

14 The Purusha with a thousand heads, a thousand eyes, a thousand feet, compasses the earth on all sides and extends beyond it by ten fingers' breadth.

There is no big issue with verse 14.27. Let me highlight the points from Adi Shankaracharya's commentary to get or understand it correctly:

So, the conclusion is: Bhagavad Gita verse:

13
What is the duration (Timeline) of the four "Yugas"?
10
Do we take rebirth if we help others?
13
Interpreting Bhagavad Gita verse 8.16
7
Why doesn't Lord Krishna give Moksha to everyone?
5
Does "day of Brahma" refer to the Trimurtic creator deity or to the supreme Brahman?

4
How can Brahman in unmanifested state reduce to the size of half a thumb?
8
Is every Jeeva "eternal" like the ultimate God (nirguna Brahman) or "temporary" within cycle?
12
If Brahman is everything, then why does Krishna (Brahman) describe himself as "best of things" in Bhagavadgita?
3
Beyond Satya loka ie. the end to separate existence?
3
How can Brahman be the 'Anga-jyoti' of Sri Krishna?
1
What are the minimum tatvas(behaviors) of Brahman?