How can I stop thoughts when meditating?

How do I stop thoughts when meditating ?

Meditating (on breath, etc) itself is a thought and I want to be occupied with it, however, I find myself constantly humming a song or thinking about the next thing I want to do after meditation. Even though I constantly remind myself that breath is what I want to focus on, still the other thoughts preoccupy my mind while another parallel thought is watching the breath/etc.

I am interested to know what the Hindu scriptures say about this.

Meditation is a purification process of mind and soul. One may require many lives to achieve that success. It requires dedication, sacrifices, truth, discipline, hard work, and many more.

The five moral restraints that help us obtain control over our lower, animal centric nature thus becoming human. These are:

The five ethical observances that help us to enhance our humane qualities preparing us for the higher, conscious life of Yoga. These are:

1. Saucha – cleanliness at all levels

5. Ishwara Pranidhana – the ability to surrender one’s will to the higher divine will after making one’s best efforts meaning thereby that one accepts with gratitude the results of one’s action coming back in the form of Divine expression

Having given us a clear view of Yama-Niyama as the firm foundation (Adikara Yoga) of a systematic Yoga Sadhana, Patanjali goes on to describe the third limb of Ashtanga Yoga, namely Asana as “sthira sukham asanam”. This is the best definition of Asana as a state that radiates stability and ease. Such a state may be attained only through regular, disciplined and determined practice. He advises us to practice Asana with a relaxation of effort (prayatna shaithilya) and contemplation on the infinite (ananta samapathibyam).

Through the practice of Asana, one attains the state of balanced equanimity (described in the Bhagavad Gita as Samatvam) that enables one to overcome the dualities (dwandwa anabighata) that normally torment us into imbalance.

He defines Pranayama as the “cessation of the processes of inhalation and exhalation”.

Pranayama that is a bridge between the external and internal worlds.

He describes the different varieties of Pranayama such as the external (Bahya), internal (Antara) and the stupefied (Stambavritti). He also explains that Pranayama practice is regulated by the location (Desha), season (Kala) and rhythm (Samkya) making it either to be deep (Dirgha) or subtle (Sukshma).

It is defines as the “withdrawing of the mind from the sensory engagements”. Just as a tortoise withdraws its limbs into its shell, the senses cease to function as soon as the mind (the main energy source for sensory function) starts the journey inwards. No wonder the mind is called the super-sense or the Ekendriya (the one sense).

Dharana, Dhyana and Samadhi are the three internal aspects (Antaranga) of Yoga:

He defines Dharana as the process of binding consciousness to a point, place, region or object (desha bandhah chittasya dharana).

He further Dhyana as the state when there is a steady and continuous flow of attention and concentration on a point, place, region or object.

The state of absorptive super- consciousness (Samadhi) is expressed by Patanjali as an omnipresent state when the mind loses itself and the object alone shines without differentiation (tadeva arthamatra nirbhasyam swarupa shunyamiva samadhi). 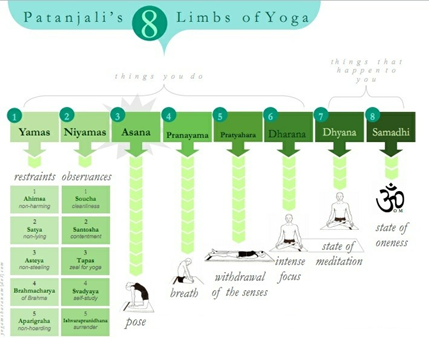 Maharishi Patanjali has given us an amazing and crystal-clear road map for meditation. I offer my deepest heartfelt salutation to the great Maharishi Patanjali, the incarnation of the thousand headed Adishesha, armed with the conch, discus and mace.

Note: This is just introduction. If anyone wants to do meditation then first learn under a Guru who himself have taken Diksha from a Parampara Praapt Guru (परंपरा प्राप्त गुरु) or else don't waste your time.

Arjuna asked a similar question to the Lord in Vyasa Mahabharata - specifically in Bhagavad Gita 6th skanda 35 sloka, and the bhagawAn said in response this answer:

Meaning: It is impossible O mighty armed, to control your mind! But by practicing the art of distraction/detachment, you can slowly draw in the mind to your desired thought/input.

i.e. it is sort of like using a thorn to remove a thorn, or fighting a fire with another fire. What the Lord is saying is that you can never really remove thoughts from the mind, but by distracting the mind with other thoughts (japa, bhajana, mindfulness) you can rein it in and control it.

For someone who is beginning to practice meditation it becomes particularly difficult to meditate because of the sudden flow of thoughts. But this flow of thoughts was there before too but now since you are sitting silently are aware of them.

If you look at the origin of thought, you really have no control over it directly once the thought originates you become aware of it but by that time the thought is already there no point in wishing that it should not come. But just a thought comes if you observe a thought goes away too just like that. Boop! So thoughts keep coming and going, just become aware of this.

There could be positive thoughts or negative thoughts, and it depends on your prana levels what range of thoughts come into existence. Prana is the life force, the higher the prana, better the flow of thoughts. That is why hatha yoga is focused on cleansing the body of tamas and rajas so that you get ready to meditate. So before sitting to meditate do some yoga asanas and paranyama to raise your prana. There are other cleansing techniques too which are called shatkarmas. But they are to be in done in the presence of a teacher and not alone.

Even with higher prana levels thoughts will come but they will be positive thoughts, spontaneous and clear.

You can chant a mantra given by your guru and that is surprisingly effective in letting you move beyond thoughts. I have done the sahaj samadhi meditation and it is the most effective way for me to just slip into meditation easily.

And learning meditation from someone who is qualified to teach is the best way to start meditating.

Not the answer you're looking for? Browse other questions tagged meditation .

3
Does leaving negative thoughts do any harm to us?
2
How to focus on third eye while meditating?
4
How to do meditation if I've got negative thoughts?
4
Difference between meditating in padmasana Vs shavasana?
1
Mantras, Initiation and Practice