What's the implication on gender dynamics of Bhagavat Gita 9.32 interpreted according to Dvaita in Mahabharata Tatparya Nirnaya by Shri Madhwacharya?

Here's the 32nd verse, from chapter 9 of Shrimat Bhagavat gita.

TRANSLATION (Bhagavat Gita As it is)
O son of Prtha, those who take shelter in Me, though they be of lower birth-women, vaisyas [merchants], as well as sudras [workers]-can approach the supreme destination. 9.32

Now this verse has been a source of controversy as it seems, in some translations and interpretations, to say that souls are born as women because of their sins. But keeping that controversy aside for a moment and let's continue with the interpretation objectively.

This is following extract from Mahabharata Tatparya Nirnaya, translated by Nagesh D Sonde 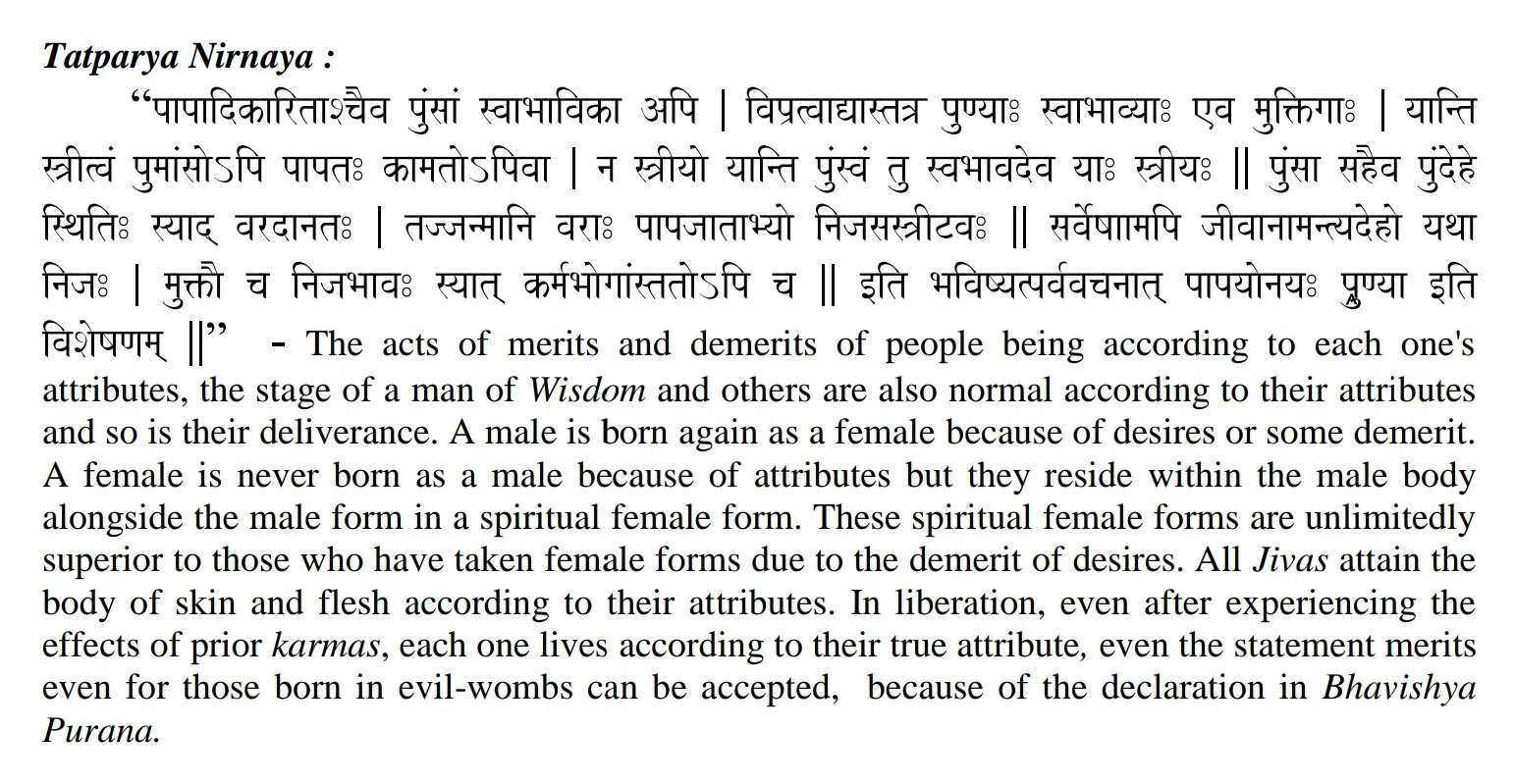 The acts of merits and demerits of people being according to each one's attributes, the stage of a man of Wisdom and others are also normal according to their attributes and so is their deliverance. A male is born again as a female because of desires or some demerit. A female is never born as a male because of attributes but they reside within the male body alongside the male form in a spiritual female form. These spiritual female forms are unlimitedly superior to those who have taken female forms due to the demerit of desires. All Jivas attain the body of skin and flesh according to their attributes. In liberation, even after experiencing the effects of prior karmas, each one lives according to their true attribute, even the statement merits even for those born in evil-wombs can be accepted, because of the declaration in Bhavishya Purana.

Here it seems to say male souls are born as females because of their sins. But female souls are not born as men as result of their merits. Instead they will inhabit a male body in spritual female form...?

What exactly does this all mean?

According to Dviata, jeevatma or soul has its guna and swabhava unchanged.

1. Is gender an unchangeable attribute of the soul? Are there male souls and female souls which are eternally that??

2. Only male souls are born as women, but women souls are never born as men? So all men now can be sure that they are a male soul, but women can be either a male soul or female soul?

3. Also when a woman soul, due to her merits, inhabits a man body alongside another male soul? So are there two souls in one body. So can some men have two souls, one male soul and one spiritual female soul? If so does the female soul has any agency and decision making capacity or all the decision is made by the male soul and female soul simply sits by and experiences life?

Ans 1: Yes Female and Male nature cannot be changed as its attaced to jiva swaroopa according to Sriman Madvacharya. Not to Linga , Aniruddha or Sukshma sharira. So According Sriman Madvacharya Females are eligible for moksha, if they perform respective sadhana. Females need not be born male to attain moksha.

Ans 2. Yes you are right female soul can never be born in male body but male souls can be born in female body. So all men can be sure that their soul is male, but women cannot be sure as their soul can be either male or female.

Ans 3.Yes female soul can be in male body, but male is the primary doer and enjoyer(kartha abd bhokta) of the body, whereas female soul cohabits the body as only enjoyer(bhokta). But the cohabiting bhokta soul can also make some small decisions based on karma, desire of jiva and will of God.
For example when Puthana tried to feed Sri krishna, it was Urvashi's desire that was fulfilled. But the other desire of mixing poison is made by other Rakshasa jeeva which is inside Puthana. But not all desire are made by bhokta jeeva, only the main jeeva makes most of the choices.

12
Feminist's claim that the Vedas, Ramayana and Mahabharata were written by male writers
10
Does Geeta have gender and caste discrimination verses?
1
Was Madhvacharya influenced by Islam or another Abrahamic religion?
3
Who is my ancestor?
2
Manu Smriti contradicts Bhagavad Gita on qualities of women?
1
What are the views of Shri Chaitanya Mahaprabhu regarding Dvaita of Shri Madhwacharya?