According to the Holy Book Ramayana written by Sage Valmiki, when Ravana attempted to lift the Bow in Sita Svayamvara, how much was he able to succeed? 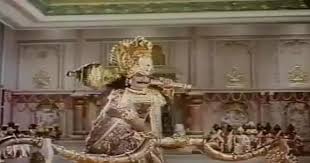 The story of Ravana attending Sita’s swayamvar and his encounter with the Shiva Dhanush has not been described in the Valmiki Ramayana. The Manas only mentions him having tested it much before the swayamvar. On the other hand the Ekanatha Ramayana describes a very different story.

In the Shri Ramcharitmanas, Ravana is described to have been intimidated by the mere sight of that bow, much before the swayamvar took place. The bards of Janaka while pronouncing his condition for Sita’s marriage describe the same:

[The Bandis said:]The strength of the kings is the moon and the Shiva bow is Rahu. It is heavy and hard, everyone knows this. That bow, seeing which great warriors like Ravana and Banasura, slipped away silently (didn’t have the guts to even touch it), whosoever breaks that hard Shiva Dhanusha.... [and the Bandis continue to recite the remaining part of Janaka’s vow].-
Shri Ramcharitmanas 1.250.2

The story of Ravana being present in the Swayamvara can be found in Sant Ekanatha’s Bhavartha Ramayana:

The bow was not turning despite Ravana’s efforts. He was trying to catch the bow with his twenty hands, but it was not getting caught. Even while being pushed by his twenty Hands it wasn’t getting pushed. Then the bow crashed against his chest and he fell down (with the bow on him). His fall made even Patala tremor. When his minister came to help, Ravana’s bones got further crushed by the bow. He said to Janaka, “Even if I die because of this bow, Indrajit and Kumbhakarna will destroy your lineage. This bow has humbled by arrogance. Do what you think fit.” Then Janaka rushes to help Ravana and alongwith many people lifts the bow off Ravana. They sprinkled water on him and made him sit on his seat. He sat there waiting to see the person who would lift the bow so that he could kill that person.
-Chapter 18 verses 117 to 132

From the above we can see that the bow wasn’t moving despite Ravana’s repeated attempts. He briefly managed to tweak its position which crash landed on him. He faced severe humiliation, described in Marathi as - रावणाची फजिती or the humiliation of Ravana.

Note: This incident is not found anywhere else and seems to be an insertion in Sant Ekanatha’s work when people got this misconception alongwith the existence of Ahiravana. Hence if at all Ravana ever came for darshan of the Shiva Dhanush, the Ramcharitmanas version is more likely where at a certain point in time (not in the Swayamvara, unrelated to Sitaji and probably even before her birth), long ago Ravana would’ve tested his strength with the Shiva Dhanusha.

24
How could Valmiki write the Ramayana?
7
Was Ravana not able to lift the Earrings of Hiranyakashipu?
3
In which year Sita was abducted by Ravana?
13
What was the reward given by Sri Rama to Jatayu for fighting Ravana?
8
Is Hanuman the first writer of Ramayana?
8
What was the age of Sita in chronological order?
6
How was Jatayu able to fight with Ravana?
4
What was the name of Ashrama of sage Valmiki?
13
Was Ravana not able to lift Pinaka aka 'The Shiva Dhanush'?