Who is this figure depicted between Shiva and Parvati? 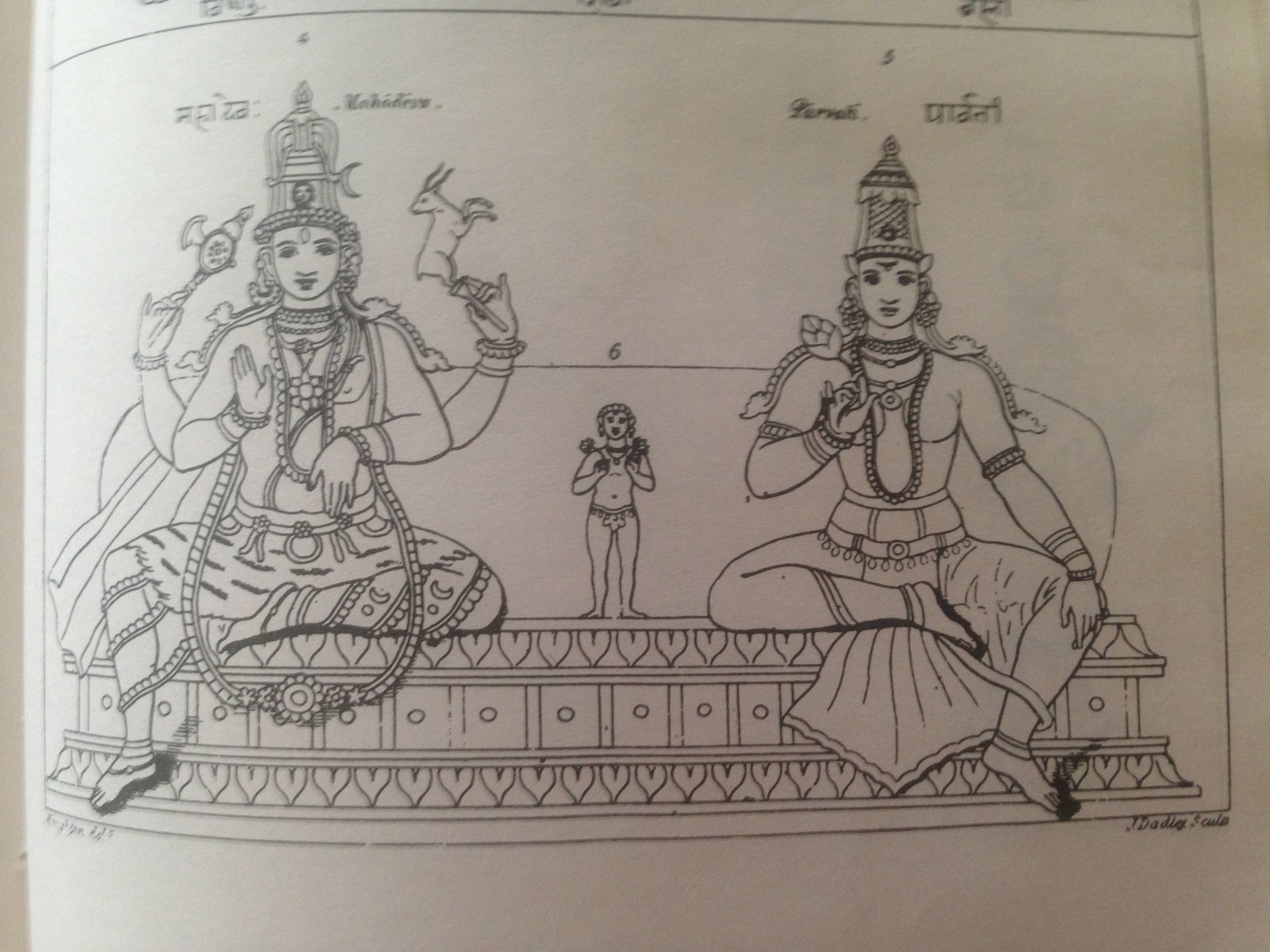 My question is, who is the small figure depicted between them, holding two lotus flowers? Is that one of Shiva's Ganas, or Shiva's son Kartikeya (aka Muruga or Skanda)? Could it be Nandi, who's described in anthropomorphic terms as I discuss here?

The reason I ask is that Moor says "the lower central little gentlemen (fig. 6) I am not acquainted with", but considering that he was writing in a period when the Europeans were just starting to become acquainted with Hinduism, we may have more information about this figure. Are there any descriptions in Hindu scripture of Kartikeya or Shiva's Ganas holding two lotus flowers?

By the way, another odd thing about the picture is that Shiva is holding a bull in his hand! Now Shiva is known as Pashupati, the lord of animals, and he rides on a bull and has a bull on his flag, but has anyone ever seen him holding a bull?

I happened to see a clipping in television describing this configuration as 'Somaskandan'. When googled I discovered a wikipedia page is dedicated for this purpose. 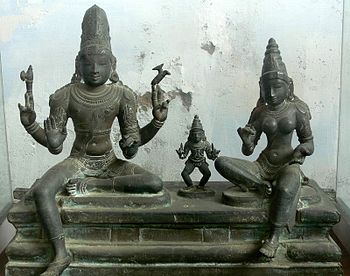 An extract from it:

Somaskanda is a particular form of representation of Shiva with his consort Uma, and Skanda as a child. This family group depiction of Shiva originated during the 6th-8th centuries during the period of the Pallava in South India. The representation shows Shiva with four arms and Uma, and between them the infant Skanda is shown as dancing with ecstasy. Over a period of time, a number of such depictions have been discovered from different regions which were once under the control of Pallavas.

The picture you have shown is showing names with the figures, but the number 6 is not named. So there is a possibility that the boy is kartikeya. But as Lord kartikeya has 6 heads, this can be some Shiva Gana or randomely the author has put this figure. Nandhi is also one possibility.

Any devotee of Lord Shiva can go to Shiva temple and offer Lotus Flowers to Shiva Lingam, so maybe the boy is for decoration purpose only. There is nothing special to be acquainted with him.

Deer is right thing shiva holds in hand it is not bull it is deer.

Not the answer you're looking for? Browse other questions tagged shiva kartikeya parvati identification-request .

10
Was Nandi really a bull?

20
Why is Kartikeya not worshiped much compared to lord Shiva, lord Ganesha and goddess Parvati?
8
Is Shiva's son Kartikeya the rishi of two hymns of the Rig Veda?
12
When did Parvati Devi marry Shiva?
3
Exact relation between lord shiva and goddess Kali?
2
What is the lifetime of parvati and present age of her?
3
What is the mantra for Shiva and Parvati equivalent to "SITA RAM" and "RADHA KRISHNA"?
7
When Shiva & Parvati had met for first time and what was the situation?
3
What is the story of Ashokasundari, third child of Lord Shiva and Parvati?