I am currently visiting India, and I just went to the Adi Keshava Perumal Vishnu Temple in Sri Perumbudur, the birthplace of the famous Sri Vaishnava Acharya Ramanujacharya. On the walls of this temple are depicted the Divya Desams, the 108 sacred places of Vishnu which I discuss in my question here. Now two of the Divya Desams are not even on Earth! First there's Vishnu's ocean of milk or Thiruparkadal, and then there is Paramapadam, which Sri Vaishnavas believe is the abode of Para Vasudeva or the supreme Vishnu, and is the destination for those who have attained Moksha. (See my answer here for more information on Para Vasudeva.)

In any case, in the temple's depiction of Paramapadam, I saw the usual attendants of Vishnu, like Garuda and Vishvaksena (whom I discuss here), but I also saw two human figures, Uparichara Vasu and Uttanka. Uparichara Vasu was an ancient king who was the father of Shantanu's wife Satyavati. As I discuss in this answer, he was cursed by some sages to fall deep within the Earth, but then he ultimately attained Vishnu's abode of Paramapadam, as described in this chapter of the Shanti Parva of the Mahabharata. 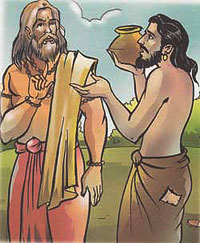 [Uttanka is on the left, Indra as Chandala on the right]

But my question is about the other figure shown, Uttanka. Uttanka is most famous for his grand quest to obtain the earrings of a queen for his guru's wife. But after that, he became a sage who lived in the Maru desert. (This desert was created by Rama's Brahmastra, as I discuss in this answer.) Uttanka was a great devotee of Krishna (while Krishna was on Earth), so Krishna showed him his Vishwarupa form and granted him a boon that he would always be able to quench his thirst in the desert. Krishna then asked Indra to give Amrita to Uttanka, but Indra decided to test Uttanka by taking the form of a Chandala untouchable urinating into a pot. The Chandala offered the pot to Uttanka, but Uttanka refused and thus did not receive Amrita! But as a consolation prize, Krishna granted Uttanka the boon that rainclouds would come whenever he was thirsty, as described in this chapter of the Ashwamedha Parva of the Mahabharata:

"On those days, O regenerate one, in which thou wilt feel a desire for water, clouds well-charged with water will rise over this desert. Those clouds, O son of Bhrigu's race, will give thee savoury water to drink. Verily, those clouds will become known in the world as Utanka-clouds." Thus addressed by Krishna, Utanka became filled with gladness, and to this day, O Bharata, Utanka-clouds (appear and) shower rain on and deserts.

But my question is, if Uttanka didn't drink Amrita and Krishna only gave him a boon for rainclouds, why is Uttanka depicted in Paramapadam? When and how did he achieve Moksha?

Are there any scriptures which describe Uttanka attaining Moksha?