What is the source of mantra: Om Shreem Shree Dharaya Trailokya Mohanaya namaha?

What is the source and all the information of this mantra:

The exact verse is found in Garuda Purana, Purva Khanda, Achara Kanda, Section 1, Chapter 29. These are the mantras are used in Trailokyamohini rite for the gaining of various objects and it is described by Lord Hari himself.

Hari said :-I will now describe the Trailokyamohini rite (fascinating the three worlds) of the foremost of male beings, its adoration and the mantram called Śridhara which yeilds religious profit, desire and wives.

The Mantra you have quoted is from Garuda Purana - Achara Kanda - Section 1 - Chapter 30 - Verse 8 . " Shreedhara (vishnu) Vidhi Dharma" . But is little different.

This mantra is used in worship of Shridhara manifestation of Lord Vishnu.

Meaning According to pancharatra worship of Narayana (Vishnu).

shridhar (श्रीधर)- The bearer of Śrī who listens-to-prayers”):—One of the twenty-four forms of Viṣṇu through which Nārāyaṇa manifests himself. He is accompanied by a counterpart emanation of Lakṣmī (an aspect of Devī) who goes by the name Medhā.

The word Trilokya Mohana is used as the one who attracts the three worlds and generally used to address Narasimha ( the man lion ) Avatar of lord Vishnu according to Narad Pancharatra. 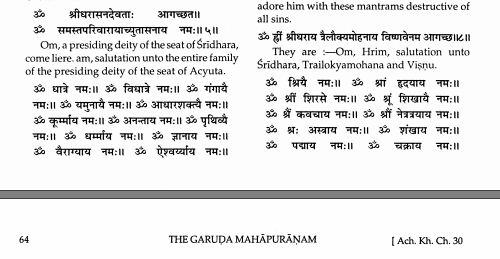