Why is Krishna portrayed with huge eyes at Puri Jaganath temple?

Krishna and his siblings Balarama & Subhadra are portrayed with huge eyes at the Jaganath Temple at Puri. This kind of portrayal is not seen in other temples. Is there any story behind this? 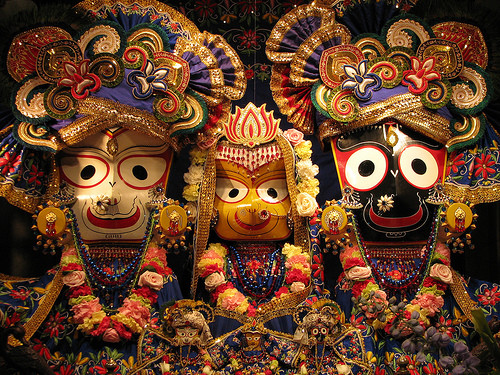 The Utkala-khanda of the Skanda Purana gives another account related to Krishna’s appearance as Jagannatha. (Utkala is the traditional name for Orissa.) Once, during a solar eclipse, Krishna, Balarama, Subhadra, and other residents of Dwaraka went to bathe in a holy pond at Kurukshetra. Knowing that Krishna would be there, Srimati Radharani, Krishna’s parents Nanda and Yashoda, and other residents of Vrindavana, who were burning in the fire of separation from the Lord, went to meet Him. Inside one of the many tents the pilgrims had set up at Kurukshetra, Rohini, Lord Balarama’s mother, narrated Krishna’s Vrindavana pastimes to the queens of Dwaraka and others.

The residents of Dwaraka are said to be in the mood of opulence (aishvarya), and they worship Krishna as the Supreme Lord. But the residents of Vrindavana are in the mood of sweetness (madhurya), and they have a confidential relationship with Krishna that surpasses awe and reverence because it is based on friendship and love. Rohini’s narration was thus extremely confidential, so she posted Subhadra at the door to prevent anyone from entering.

and also those pictures are from Orissa tradition, Tala patachitra

A familiar and lovable name of Lord Jagannath is 'Chakadola', meaning round eyes. The word 'Chakadola' is synonymous with 'Chakanayana', 'Chakaakshia'. Unlike those of Lord Balabhadra and Goddess Subhadra, the eyes of Jagannath are round in shape. The symbolic meanings of Chakadola are as interpreted by some eminent scholars, recounted below.

8
Why and how Rath-yatra in Ahmedabad started?
11
Why Shivalinga sthapana in temple is unique in Hinduism?
8
Worship of combined deities of "Krishna, Balarama, and Subhadra" as in Jagannath Puri?
12
The Legend of Chessboard (Pala payasam story) of Ambalappuzha Sri Krishna Temple
17
Why does Lord Jagannath suffer from fever?
9
Are these claims about Puri Jagannath Temple really true?
0
Why do we not find any image of Durga/Kali/Shakti image in renowned Sri Vishnu/Krishna temples?