As some of you must be knowing, Arya Samaj is a Hindu organisation that rejects the notion of idol worship and teaches God is only formless. This is due to the controversial verses in the Yajurveda such as "Na tasya pratima asti".

As a result, the Arya Samajis reject Puranas and Agamas (but accepts the Itihasas and the Dharmasastras though they believe these texts have a lot of interpolation) and accept the Vedas and the Mukhya Upanishads as the only true authoritative texts of the Vedic religion.

However, the Brihadaranyaka Upanishad 2.3.1 says God is both formless and has form:

Of course Sanskrit words can have multiple meanings so I guess Arya Samaj has an alternate translation and interpretation to the above verse. So how do Arya Samajis translate and interpret this verse?

For this You can check Upanishad translated by an Arya Samaj I author. I am using Narayanan Swami translation. Here he translated ब्रह्मणो as Universe or Five elements in place of God. 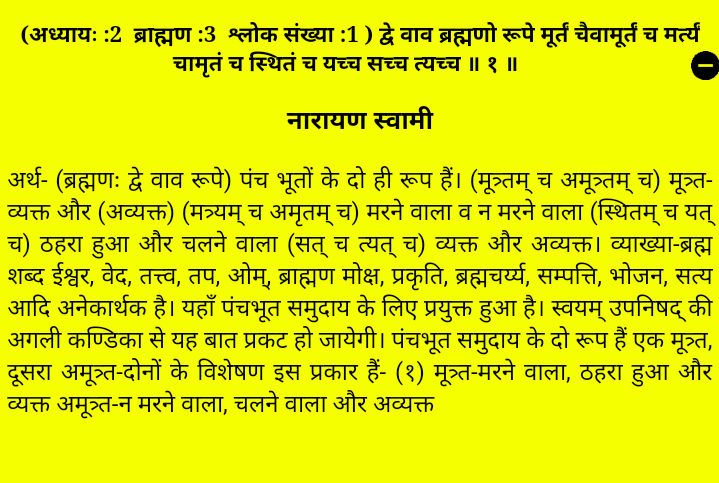 In the commentry Narayan Swami has written that Brahmana has many meaning like God, Vedas Elements etc. And here it is used for Elements.

5
Reference for "Dayanand Saraswati rejected Brahmanas (of Vedas) and Aranyakas (of Vedas) and Upanishads"
0
In Yajurveda there is written “Naasptimasti” means there is no idol of god and still we do worship of idols?