What is the story of chokha mela?

Chokha was a saint from Maharashtra bhakti movement.

He is known to have faced many difficulties due to caste but continued the good work.

One of his well known abhanga which reflects social norms back then,

What is the brief story and important events related to his life ?

What was the cause of his death?

I am compiling a short biography Of Saint Chokhamela a 14th century Bhakti Parampara poet saint form Maharashtra by taking ref. material from these two books. .

Saint Chokha Mela was born In the fourteenth century to a devout and god fearing couple Sudam and Savitribai in a village Mangalwedha near Pandharpur in Maharashtra They both were devotees of Vitthala or Panduranga. They were of the lower cast.

He didn't get any education or went into school but since his childhood his devotion towards Vitthala or Panduranga has grown . He used to continue his traditional job of carrying dead animals etc. for some time.

His devotion to Lord Vitthala was pure and unmatched. His family migrated to Pandharpur and he used to listened to Sant Namdev’s Kirtan. He was moved by Namdev’s teachings and became a disciple of the great saint-poet Namdev. Saint Chokha Mela was constantly chanting the name of Panduranga and he used clean the temple premises . He was not given entry into enter the sanctum sanctorum because It was custom at that time that lower class people were not allowd inside the temples.

About his Good Works

Saint Chokha Mela felt sad to find his community people in ignorance and superstition. He educated them to be clean and god fearing and to give up bad habbits.

On an occasion it is said , when he saw group of his people fully drunk and wanting others to take drinks ,he persuaded them not to do so. His mission against alcohol spread among his people.

Choka Mela wanted his people to listen to religious discourses and songs in order to change their attitude and habits. He inculcated the discipline of hard work ,regular bath and prayers and clean and virtuous life. He also took them to various holy places and temples.

He returned to his birth place afterwards . Chokhamela was participating in construction of the a wall when the wall suddenly collapsed and he was killed due to that. His Guru Saint Namdev brought the remains of Chokhamela and constructed his Samadhi in Pandharpur.

His biography was written by "Mahipati" ,and he included sevral miraculous incidents as Vittala himself came to meet Chokhamela and even took dinner with him in his hut. 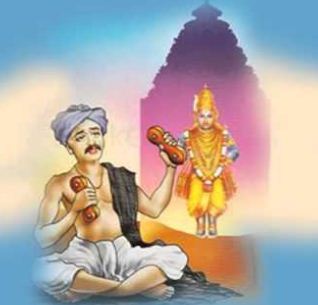 Not the answer you're looking for? Browse other questions tagged life bhakti saint .